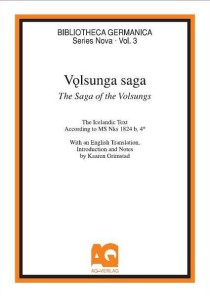 Volsunga Saga / The Saga of the Volsungs

Volsunga saga ranks as one of the foremost works of prose written in thirteenth-century Iceland.

A highly dramatic rendering of tales from the remote Germanic past, the saga presents the Old Norse version of the story of the Volsungs, Gjukungs, and Budlungs, three families fated to destroy each other.
A continental German version of this history is recounted in the well-known Middle High German epic the Nibelungenlied. The author composed the saga using earlier cycles of heroic poems, imbedding in his prose text a number of poetic stanzas and one nearly complete poem that we also have recorded in a thirteenth-century collection of poetry known as the Poetic Edda. In the nineteenth century the story was recreated as a major cultural document by Richard Wagner in his cycle of epic music dramas Der Ring des Nibelungen, inspired by his reading of Volsunga saga.

This edition presents a new English translation of the saga with a diplomatic transcription of the Old Norse text, based on the only vellum manuscript Nks 1824 b, 4° from 1400, on facing pages. The introduction provides the reader with an analysis of the saga's structure and thematic content.

Order and pay via paypal